Ribamar e Roberto, aka Dupla Os Vagalumes (translated directly as Double The Fireflies), only released this single compacto as a duo. It is wonderful and unusual, because it harkens back to a time when vocal baiãos were popular. Similar to Ouvindo by Trio Marayá, this is one of the last records of its kind. 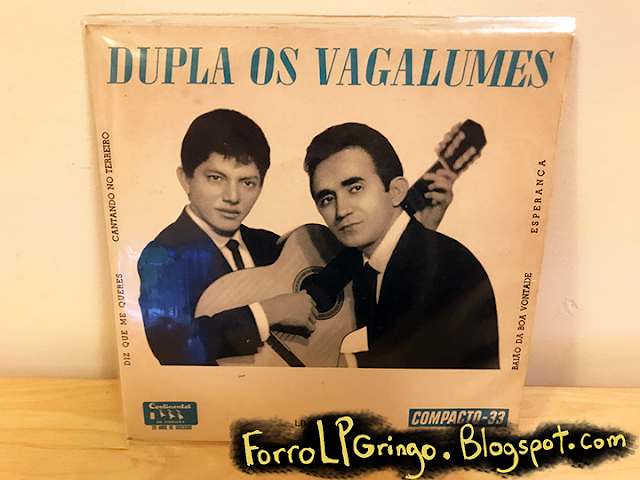 Anastácia's early catalog features two records with nearly identical covers and nearly identical track listings, but there are variations between the 1965 Continental release, Anastácia No Tarrado, and the 1970 album, Uai... Uai. I can understand using the same cover, but varying the tracks is a bit maddening. This is fairly unusual for forró albums. The French label Sonodisc had a habit of releasing albums with similar covers and entirely different track listings.
Forrófiá, Conselho da Umbigada, and Tá Nascendo Fio are only available in the original 1965 LP fully titled Anastácia No Torrado - Anastácia Com Conjunto É Côro.
O Canoeiro, Assucena, and São João Está Chegando are exclusively available on the 1970 Disco Lar LP, Uai... Uai.
Forró No Salão is a brisk track featuring Anastácia's distinctive vocal. Mercifully, it appears on both version of this LP.

Macapá (baião) from 1950 by Luiz Gonzaga sounds electric and alive. It is punchy and direct, which must have sounded so refreshing at the time. This is another example of Luiz Gonzaga sounding like the future. Macapá is pure joy.
Posted by Rob Keith at 5:41 AM No comments:

Today, we have a sunny forró instrumental from the mighty Abdias. Abdias may have the most extensive catalog of any accordion player in the history of forró. Forró De Chico Gato was recorded at the tail end of his career at Columbia Records before he became a producer and one of the main members of the house band at CBS. The instrumentation will be familiar to folks who love CBS forró from the mid-1960s through the 1970s: The bass line is played by violão de sete cordas. There is a mellow, dark and boxy-sounding cavaquinho (I mean that in the best sense) and a zabumba. You can also hear a chattery wood block throughout. Getting all of these rhythm instruments to sound balanced and pleasant is not always easy, but the musicianship and recording quality is often stellar on Abdias recordings. He truly was one of the genuses of the genre.

Renato Moreno's recorded output was minimal, with only a single compacto, featured here, and an LP. Both were released in the 1960s. Renato Moreno is credited as a songwriter on releases by Anastácia and Dió de Araújo, although it is unclear if this is the same artist. While the LP appears fairly frequently, O Trovador Do Baião is far scarcer.

Pápa Goiaba (baião), by Luiz Wanderley, is one of his numerous 78rpm singles and appeared on several LP reissues, including  the Rosicler compilation E Seus Grandes Sucessos (1960) and O Forró Do Wanderley in 1961. This transfer was taken from the original 78rpm.

Saudade do Ceará by Trio Irapuã is exceptional for a number of reasons. One, it is a baião group vocal pop song. Although there were groups who worked in this style, like Quatro Ases E Um Coringa and sometimes Trio Irakitan, this was atypical. Most vocal groups recorded sambas. Two, this was released on compacto. Vocal groups were a dying breed, and with few exceptions, most did not survive into the vinyl era. I know virtually nothing about Trio Irapuã, but this seems to be the sole release from this group. There seems to be one later release on Mocambo from a much older version of the group.

Welcome to Forró LP Gringo. Forró is a banner term covering a variety of northeastern Brazilian rhythms and styles, including Baião, Côco, Rojão, Xaxado, Xote and Arrasta-Pé. Forró is a massive popular music genre in Brazil. It may also be the least known and exported Brazilian music. This blog was created to share northeastern Brazilian music and provide some context for the releases. As my collection has grown, my focus has shifted from cherry-picking the best tracks from long out-of-print LPs to preserving great music that has never been reissued.

For 60s Pop fans, check out my other blog: